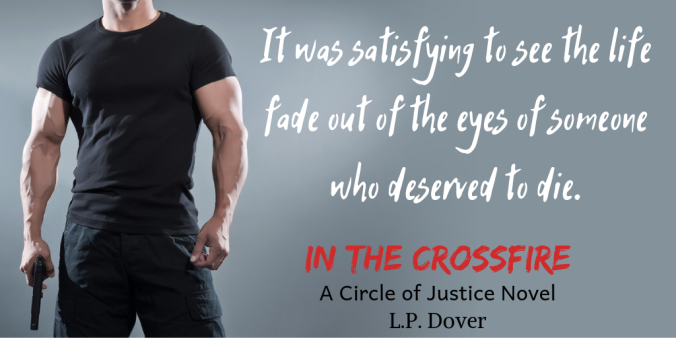 Bryce Chandler, FBI agent, member of the Circle of Justice, twin brother to Ian Chandler, and a man who has no problem putting himself in harm’s way to rid the world of the scum that get away with their crimes for some reason or other due to our justice system. He is the only man for the job when one of the men on the list for the Circle of Justice to eliminate is a mob boss. It’s hard to get close to these men and he has the demeanor and the plan to do it. However, his plans will be compromised when he meets Layla, the mob boss’s daughter.

Layla Corsino is a lawyer and the daughter of a ruthless mob boss who has no barriers when it comes to destroying his enemies. She’s nothing like her father and her innocence is refreshing to Bryce, but is it real? She’ll become a pawn in her father’s plans to get to the top and rule. Can Bryce help her, can he save her from being in the middle of her father’s plans?

I’ve read the other three books in this series and have loved them, but I think I have to say that this one was my favorite. It has just the right amount of suspense, tension, and twists that I hated to have it end. Bryce is not a joker like his twin brother Ian, but he knows how to let loose and enjoy life some as well. He may be the one who is serious and always working, but after meeting and getting to know Layla, he is softer and more down to earth. I love how they both seemed to bring out the best in each other.The men in the Circle of Justice are lethal killers who take out the people that most deserve to be removed from this earth. They aren’t killers like serial killers, but they also will tell you that they enjoy what they do.

I give this story a 5-star review and highly recommend the Circle of Justice Series to readers who enjoy, mafia, romantic suspense, and stories of righting the wrongs in the world. I look forward to Reed’s story, hopefully in the near future.