When your worst fear happens twice…

When my daughter, Justice, was kidnapped. It took a lot from me, too.

My sense of safety.
My confidence as a mom.
My belief that most people are good.

The same thing wouldn’t happen twice to the same family…right? The chance it will is what scares me the most.

Charity and Drew are trying to overcome their fear for their daughters after Justice was kidnapped. Neither one of them can relax when for the fear that it could happen again.

Harley is dealing with her own issues after her twin was kidnapped and returned. They all blame themselves for Justice being taken. The only problem is that Harley is too young to realize that her parents are fighting to maintain a normal life again and she can’t see why she isn’t allowed to do whatever she wants. She has always been a wild child, but her wildness and stubbornness could cause more issues for her family than she plans on.

I loved this story. I have loved all of the Heaven Hill shorts and this one does not disappoint. Drew and Charity’s connection is strong, they just need to remember that and keep the communication lines open so that they don’t put their marriage in turmoil. I give this short story a 4-star review and highly suggest all of the Heaven Hill books as well as the shorts. They are great stories and the characters are great as well.

Jake is destroyed after watching the news report on TV. He missed his chance and now he is out for revenge. His best friend is gone, and he doesn’t know what else to do. Luckily, his team is behind him 100%.

Olivia’s mind won’t let her realize what is going on around her and when her mind and body finally connect, she may not have the chance to save herself. Her regret is that she never told her best friend that he really meant more to her for many years.

I loved the flow of this story. It is story of what ifs, trust and wishing for second chances. This was my first read of Anna Blakely and now I need to go and get the rest of the R.I.S.C. series to read, especially Book 2 of Taking a Risk. If you like stories of military, special ops, rescue, strong women, and characters that are loyal to each other, then you should pick up this book and read it I give it a 5-star review and I am looking forward to reading more of the R.I.S.C. series in the near future. I will read more of Anna Blakely’s books as well because I like her writing style.

This story was dark, suspenseful, and a beautiful love story.

Ekene is the one in charge of his security business, but his father pulls the strings with the money bag and he wants Ekene to play bodyguard for a model who has been receiving threats. She is the daughter of a well-known man and people would love to get ahold of her for ransom. Ekene is retired military and he is good at what he does, but he does not want to babysit a spoiled model.

Rosamma had a rough childhood, but she was finally rescued by her father, a rich, well known businessman who has a lot of enemies. After she is rescued by her father, she gets into modeling and is able to fly around the world and model her own line of clothing. Little does she know that her life is about to take a dark turn that may get her killed.

I liked the darkness and twists in this story. It is a story of betrayal, trust, and a love that is healing and deep. I give this story a 4-star review and suggest it to readers who enjoy dark, twisted, ex-military stories.

I had it all.
Family. Career. A future.
Until a couple of bikers took it brutally away from me.
They scarred me both inside and out, killing the man I once was.
Jared Koynakov is dead and Koyn rose from the ashes.

Ten years later, I live by a code that is shaped by hate, anger, and revenge.
As prez, I’ve built a brotherhood of men who share the same thirst for vengeance and are loyal until the end.
Together, we will find those bastards and end them.
Every last one of them.

All it takes is one slip, and I almost have them in my grasp.
Until a pretty pageant girl, who looks far too much like my daughter, steps into the fray causing the ultimate distraction.

I must choose between my revenge and being her savior.
I’m one helluva biker with a taste for torture, but I’m an even better daddy…

K Webster is a USA Today Bestselling author. Her titles have claimed many bestseller tags in numerous categories, are translated in multiple languages, and have been adapted into audiobooks. She lives in “Tornado Alley” with her husband, two children, and her baby dog named Blue. When she’s not writing, she’s reading, drinking copious amounts of coffee, and researching aliens. 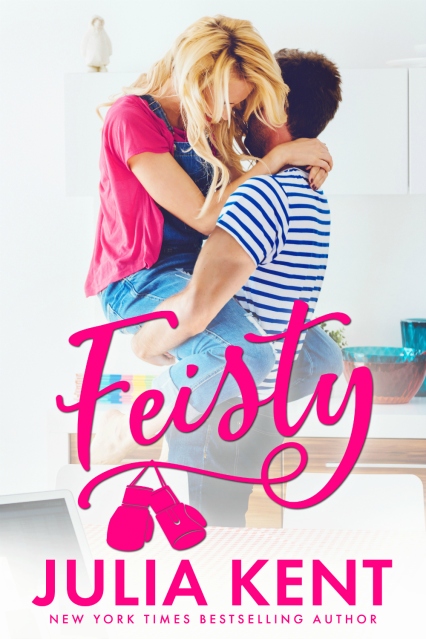 I’m not too proud to admit that finding Mr. Right involves swiping right. Right? Welcome to dating in avocado toastland.

Here I am, on my first blind date, ever, courtesy of a smartphone app and my two annoying best friends.

So what is Chris “Fletch” Fletcher doing, walking across the room, looking at his phone like he’s pattern matching a picture to find a real person he’s never met before?

The guy I drop-kicked in seventh grade cannot be my blind date. The guy who earned me this infernal nickname.

“Fletch,” I start, walking into my office, waving him on. As we pass by the children, they snicker and whisper, the girls more stirred up than the boys. We reach the office, I close the door, and ask, “Why are you here?”
“I came to see you because I knew this was your lunch break and you’ve been ignoring my texts and calls.”
“Maybe I need some space.”
“I respect that.”
“Clearly, you don’t.”
“Look, Fiona, I’m not here to argue with you. Or to crowd you or upset you. The opposite, actually. I realized our wires have been crossed and it was better to just come to you, face to face, and say what needs to be said.”
“You couldn’t wait until I wasn’t working?”
“If you’d answer my texts and calls, I could.”
“Fair enough. What do you want to say? What needs to be said?”
“I would like to ask you out on a date.”
“A date?”
“Yes.”
“Why?”
“Because I like you.”
“That’s it?”
“Isn’t that enough?”
“After seventeen years of teasing me, of that stupid nickname following me around like a poltergeist, now you suddenly decide that because I saved your nephew you want to date me?”
“It’s not like that.”
“Then what is it like?”
“I don’t know. Let me find out what it’s like by spending time with you. Let’s both find out what the other is really like. Do we have to define this? Let’s explore it.” He grins. “Let’s explore each other.”
“I think you’re trauma bonding with me and getting that confused with having feelings for me.”
“Trauma bonding?”
“We went through something emotionally intense together. You helped me. I saved your nephew. But that doesn’t mean we should date.”
“That’s not why I’m asking you out.”
“Is it because we kissed?”
“That’s not why, but it certainly adds to all the reasons why.”

A FREE prequel to Fluffy 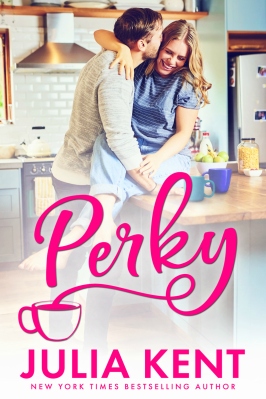 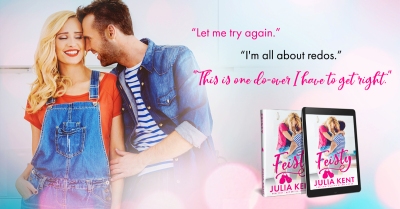 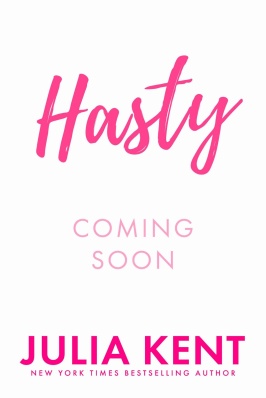 New York Times and USA
Today bestselling author Julia Kent writes romantic comedy with an edge.
Since 2013, she has sold more than 2 million books, with 4 New York Times
bestsellers and more than 19 appearances on the USA Today bestseller list. Her
books have been translated into French and German, with more titles releasing
in 2019.

From billionaires to BBWs to new adult rock stars, Julia finds a sensual, goofy
joy in every contemporary romance she writes. Unlike Shannon from Shopping for
a Billionaire, she did not meet her husband after dropping her phone in a men’s
room toilet (and he isn’t a billionaire she met in a romantic comedy).

She lives in New England with her husband and three children where she is the
only person in the household with the gene required to change empty toilet
paper rolls.

Blurb:
When Dixyn Knox left her home with dreams of seeing her name in lights in LA, she never thought she’d go back. Wanting to get away from the motorcycle club life she’d been born into, she left without a backward glance. But four years later, after failing to make a name for herself and getting mixed up with the wrong crowd, her grandfather passes away, and she decides to return to her roots. What she doesn’t expect is to get involved with Ford Lawson, her father’s biggest rival and president of the Suicide Kings MC.
Sixteen years older, he is everything Dixyn swore she didn’t want; outlaw biker, cocky as hell, with a way of getting under her skin. He pushes all her buttons, but for some reason, she can’t get enough of him. They both know what they’re doing is wrong, but neither are able to stop, caught up in the rush of their forbidden romance.
But when Dixyn’s troubled past catches up to her, their relationship is the least of their worries. 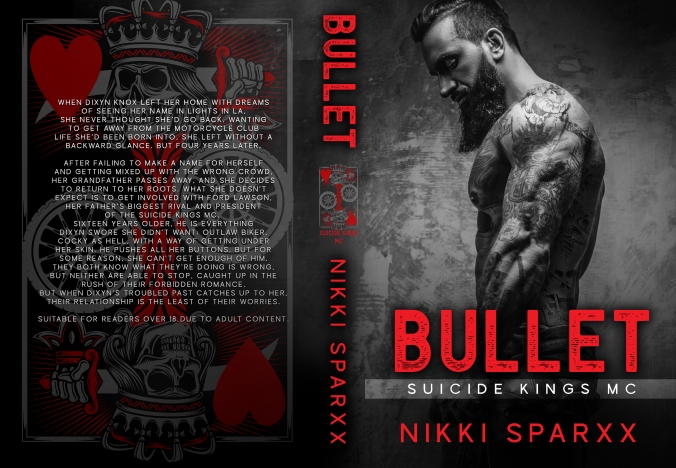 Author Bio:
Lover of angst, drama, and happily ever afters, Nikki Sparxx is the bestselling author of The Scars Series. When she’s not writing, Nikki enjoys reading, binging Netflix, and spending time with her diva chihuahua and two crazy Frenchies.

I broke the number one rule as a Satan’s Knights prospect.
I’m in love with the former vice president’s wife.
If anyone deserved a happy ending it was Carrie.
What she got instead was a damn tragedy.

Walking the line, exercising self-control, and respecting boundaries was never my thing.
Thou shall not covet thy neighbor’s wife—it’s one of the ten commandments and the number one rule you don’t break when you’re a prospect for the Satan’s Knights. I fell in love with the former vice president’s wife. A lethal mistake on my behalf, that only left me bitter and standing on the edge of an overpass.

I would’ve jumped if it hadn’t been for the terrified girl, crying on the other side of the fence. She was seventeen and the district attorney’s daughter. She was also pregnant with my little brother’s baby. Desperate to avoid the wrath of her powerful father, she hid her pregnancy and protected us all in the process.

If anyone deserved a happy ending it was Carrie.

What she got instead was a damn tragedy. The kind of unimaginable horror that crushes your soul and breaks your heart. Now, we’re both standing on the edge of the overpass, walking a different kind of line, ready to jump.