Logan Storm, an ex-Delta Force sniper, with scars on the inside, is drifting through life on his way to nowhere. While trying to make peace with his past, Logan encounters a young bar owner and her brothers, with trouble brewing the size of Montana.
Skylar James is worn out. She’s trying to raise her two teenage brothers  and hold on to the only home they’ve ever known: 500 acres won by her father in a poker game before they were born.
Luckily for Skylar, Logan finds the peace he’s been looking for in the all-American beauty and decides to stick around Ennis, Montana just as adversaries renew old feuds and bodies begin to pile up in the aftermath. 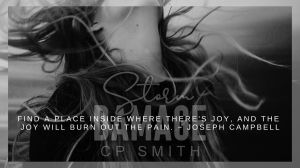 CP Smith lives in Oklahoma with her husband and five children. She loves football, reading, and card games. Writing for her is about escape. She writes what she loves to read, and leaves the rest to those with better imaginations.

Big sky, small town and a man looking for peace.

Skylar James is trying to keep her brothers and her together after losing their father two years ago. She is raising two teenage boys, running her father’s bar and working hard to keep her brothers out of trouble and on the right path. When her older, estranged half-brother threatens their home and livelihood they are all worried. They have felt as if they are alone since their father died, but this threat against them will show them that they have always been had someone watching their backs. They have a hill to climb before they can find their footing and their lives can move forward the way they want it to, but with the help of unlikely allies and a man that shows up in town, they will find so much more than they thought they wanted.

Logan Storm is ex-Delta Forces. He left the service after losing his closest friends in an ambush, his brothers. He requested that when he retired, they let Max, their military dog leave with him, and his wish was granted. Now Max and Logan are traveling around the country looking for peace and a reprieve from the nightmares that plague Logan. When he wakes up and finds the beautiful countryside around him where he stopped for the night to sleep, he is ready to find coffee and move on, but fate has other ideas for him. Little does he know that the peace he has been searching for was in Ennis, Montana all along.

I loved this story. While it is a story of an ex-military man that is haunted by his demons of being at war and losing the three men that meant the world to him, it is also about family, and finding family in the most unexpected places, times, and ways. Skylar James has three brothers, two that she has mostly raised since she was ten years old and an older brother that has never wanted anything to do with her or her brothers, other than hurt them and destroy their world. Logan was an only child that was raised in the system and found family in the Army and Delta Force, as well as when he finds a young woman two teenage boys sitting along the side of the road looking so devastated. Little do any of them know that their worlds will be changed in more ways than one. I give this story a 5-star review and look forward to more of this series. I hope it will be Ty and Jamie’s story next. The story was full of danger, actions, an awesome dog, and great characters.