We’re on tour with Addictive by KE Osborn!

It haunts my dreams. ⁣

The moment I embraced my addiction, I knew my life would change dramatically. ⁣

As the VP of the Houston Defiance MC, my job is to stand tall. Contain the demons clawing from the inside, begging to escape from within. But when I embrace my bloodlust, nothing can tame my wrath.⁣

Zero took me in as part of his family – a bond unbreakable.⁣

I should care about the no-touch rules.⁣

And the fact they are in place on his sister. ⁣

And I am all too aware that I’m dangerous.⁣

She needs to see that too. ⁣

Her brother loathes the idea of us. Honestly, I put up a fight too.⁣

When chaos strikes the club, we’ll turn to each other.⁣ 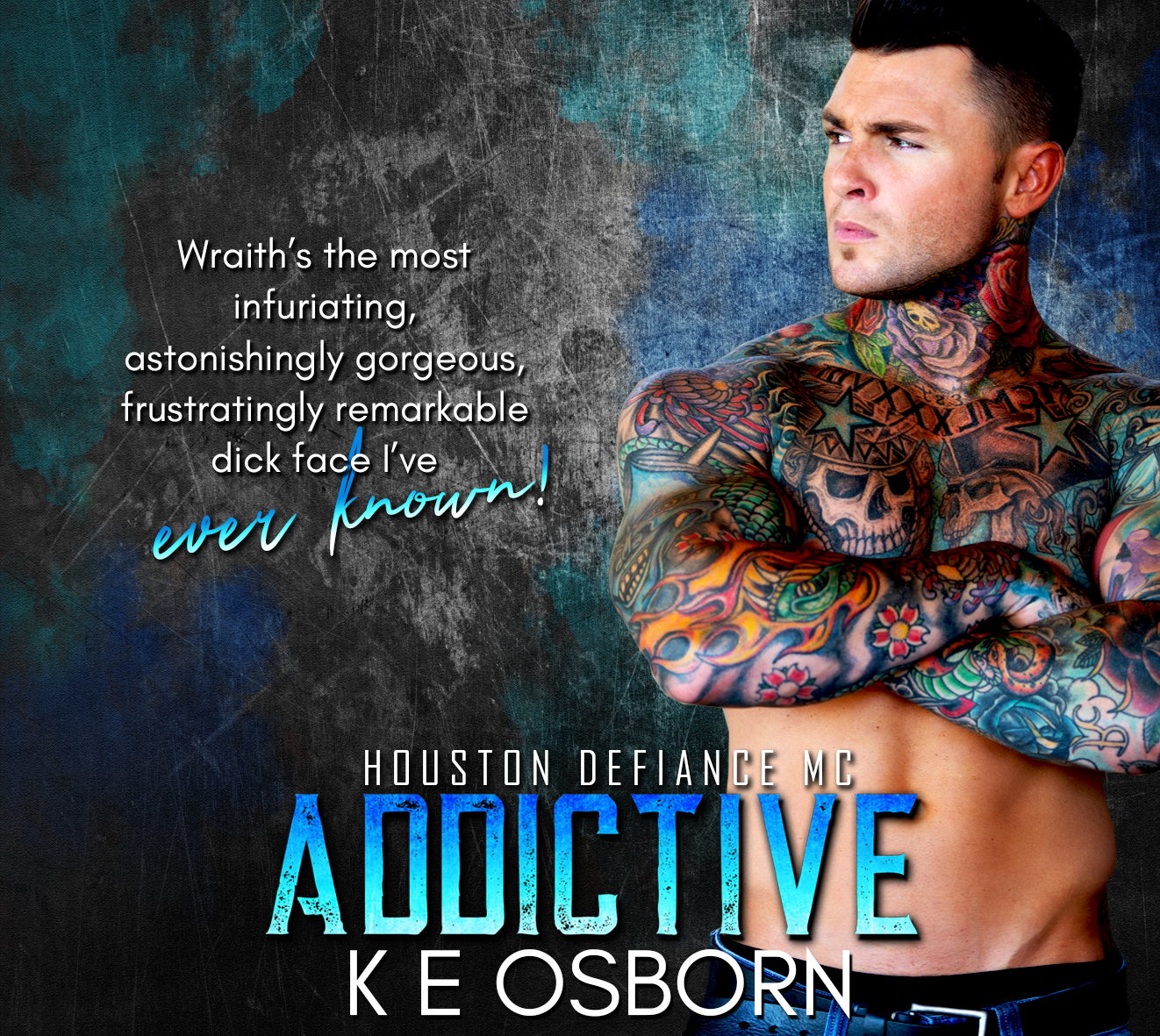 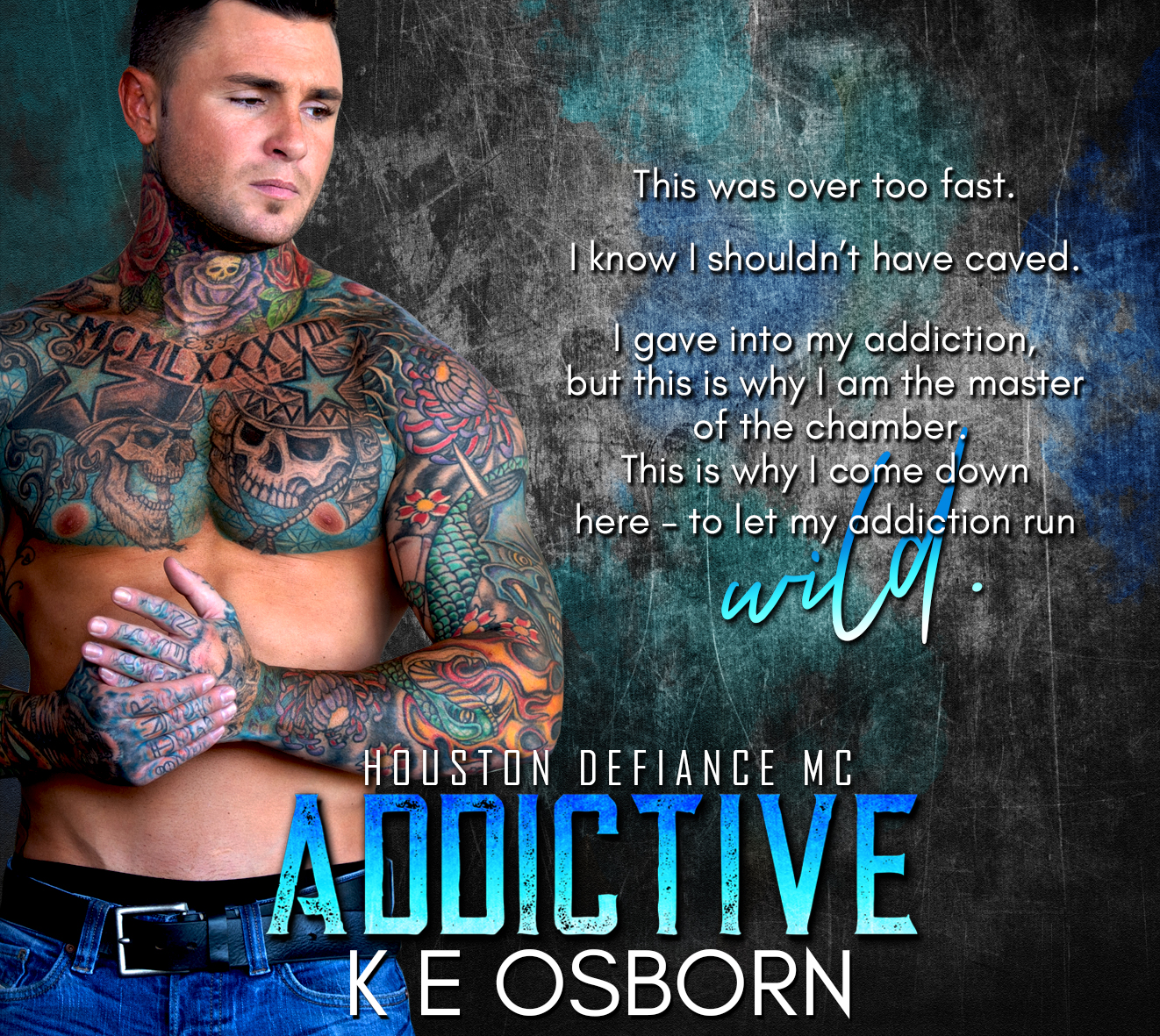 Add to your Goodreads TBR!

With a flair for all things creative, International Bestselling Author K E Osborn, is drawn to the written word. Exciting worlds and characters flow through her veins, coming to life on the page as she laughs, cries, and becomes enveloped in the storyline right along with you. She’s entirely at home when writing sassy heroines and alpha males that rise from the ashes of their pasts.

K E Osborn comforts herself with tea and Netflix, after all, who doesn’t love a good binge?

Turn lust into love at www.keosbornauthor.com

Talon “Wraith” is the VP of The Houston Defiance MC, he was brought into the MC by the President’s son when he was living on the streets trying to survive. He had a haunting, destructive past that made him into the man and monster that now is. He has addiction, but it’s not what you would expect it to be.

Kharlie “Prinie – Princess” is the daughter of the past President and sister to the current President, Zero of the Houston Defiance. She’s having a hard time accepting the MC as family since she has lost so much because of the MC and the war they have with the Delta Militia. She took her younger brother and left the Houston Defiance for a year but is now back home. There is unfinished business between Prinie and Wraith. They’ve been trying to keep it from Zero, but they can’t seem to keep their issues behind closed doors.

This was a great story. It has some hard issues that it deals with, but the story, the characters and the plot are great. Prinie and Wraith are not meant to be together according to the MC. Prinie should be hands off because she is the MC Princess, but Wraith is drawn to her and he fights that attraction the best he can, but Prinie is determined to have Wraith, because she is drawn to him and can see so much more in him than the rest of the MC. He’s a dangerous man and Zero doesn’t want them together, but circumstances will throw them together in this story and they will not be able to fight each other any longer. I give this story a 5-star review and cannot wait for Kevlar’s story. I love the characters in this series, the men are possessive, dangerous and loyal to the MC as well as their women, the women are strong, sassy and determined to have the man that their heart desires.