After a decade spent claiming a throne for himself in the seething violence of the criminal underbelly, all Donatello Vanici craves now is peace.
Only a union forged between his heir and the most powerful mafiya family in existence could ever be strong enough to end the bloodshed for good, but the Stepanov head resists his overtures at every turn…
Until tragedy strikes, and forces Donatello’s hand.
Haunted by a past that dogs her every thought, Willow Stepanov will do anything for the man who adopted her—until a chance encounter with the enemy lands her right in the middle of a dangerous power struggle and a war that grows more violent and vicious each day.
But it’s not just her future her captor holds hostage.
He is a man with nothing left to lose—while she may just lose everything.
Her life, her family, and her heart…
Mice and Men is a new standalone series in the War of Roses Universe.

ADD TO GOODREADS
ADD TO BOOKBUB

EXCERPT
Cold, his eyes rake over me. From my scalp, down to my heaving chest. His jaw twitches, his breathing audibly unsteady. Heavy. Rasping.
“You can’t be her…” To prove it, he brushes the thumb of his free hand down the length of my cheek. Did he ever stop to picture how his little _____ might look seven years after his betrayal? Did he imagine some weak, broken, mournful creature?
Anyone but me. I am not broken, holding his gaze even as tears blur my vision. I am not some sniffling little victim. 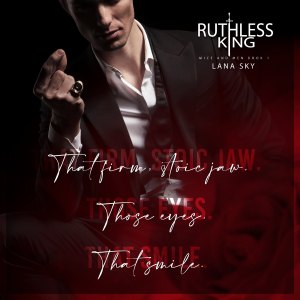 Lana Sky is a quirky writer from the US who dabbles in dark, paranormal and contemporary romance. Her stories aren’t always typical, but contain a little something for everyone.

He was once known as Il Mostro, The Butcher among others, but he’s changed, and he lives his life on the straighter path now. He was once the head of the famiglia, but that didn’t protect him or his family and the day he lost them is the day his life changed forever. He lost everything that day and the days after were pure torture. Donatello Vanici had it all and lost it all. Now his life is making sure that his nephew Vincenzo finishes medical school and has a good life. The only problem is that he could lose Vincenzo too, and it would be the last straw for Donatello.

She wasn’t wanted by her parents. She survived an illness, but it left her mute and her parents saw her as damaged and a pawn. The day that she was taken to Donatello’s house and left was the day her life started to look up, but that changed after Donatello lost his family. He needed to hurt, so he decided to hurt Safiya by selling her at the age of 12. She only tasted a loving house and family for a short time until she was rescued by the Pakhan, Mescha Stepanov and once again her life has taken a turn for the better. The only problem is that Safiya is having a hard time accepting that it will last. The only way she can move on and accept her life with the Stepanov’s is to see the past dead and buried. She has changed her name, but her past won’t let her go. She is no longer Safiya Mangenello, she is now Willow Stepanova.

This story was dark, twisted, and brutal. Donatello was a man in charge until he lost everything and became a broken man that just wanted to live his life and protect his nephew. When he and Vin go a debutante ball for Willow Stepanova, Don finds his world crashing down on him once again and he could lose everything this time, including his mind. His fall won’t be of his own making in the end, but he will get vengeance on the man that has ruined so much of his life. This story ends on a cliff hanger and is full of action, twisted scenes, page turning suspense and great characters. I give this story a 5-star review and am anxious for Queen of Thorns to come out.