Circumstance put Cristina on my path.
Fate bound her to me.

Cristina and I share a common past. A single night that changed the course of our lives.

She asked me if I was a monster the night I met her.
I am.

She’s about to learn I’m her monster.

Because the countdown that began eight years ago has ended. Her time is up.

On the stroke of midnight, she’s mine.

Get the FREE prologue now! 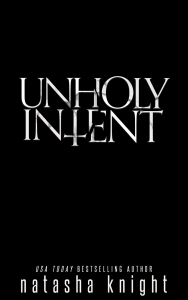 USA Today bestselling author of contemporary romance, Natasha Knight specializes in dark, tortured heroes. Happily-Ever-Afters are almost always guaranteed, but she likes to put her characters through hell to get them there. She’s evil like that.

She lost so much that night. Now she’s about to lose herself as well as her freedom. It has been eight years since she heard that voice and saw those eyes, now she has to face him again and she has no idea what is in store for her. Cristina is a pawn in his family’s revenge for their loss the same night that involved her family and theirs.

He is not a nice man; he has done a lot to get to the head of the family and restore his families name. He has to take Cristina as his payment now, but he is finding it hard to do as his father wants him to do for retribution. He has done some things that he is not proud of but restoring his family at the top of the game was needed. Damian is confused by his feelings over Cristina and he has decided that he will do what he needs to but that he will not do what his father expects.

I loved this dark, twisted mafia story. Damian is a haunted soul that is determined to lead his family, but he may have some obstacles to overcome and retain his spot as the leader of the Di Santo family. He is feared by most men and women and gets away with a lot, but there are few that stand in the shadows waiting to take what he has and make it theirs. Cristina could be more of a pawn than Damian thinks she is. Their connection is confusing to Cristina. She was young when their lives first crossed, and she is now eighteen and finds herself as property of Damian DiSanto with no warning or preparation. If you enjoy a dark twisted story of possession and mafia connections this story will not disappoint. I give it a 5-star review and cannot wait for the conclusion of Unholy Union. Cristina’s strong will and instinct to survive could be tested even more in the next book.