Title: Tool
Series: Ruthless Kings MC #3
Author: K.L. Savage
Genre: Contemporary MC Romance
Release Date: June 19, 2020
Blurb
Being the VP of the Ruthless Kings has made me jaded and scarred, a savage bloodthirsty beast.
Grit, pain, blood, the three constants in my life.
Love? I wouldn’t burden anyone with loving me. I’m a hard man to love.
Until she walks through the garage doors, looking perfect in her little blue dress and high heels.
She’s neat and clean and too damn good for me, but I’m determined to get her filthy.
Then Reaper reminds me of the debt I owe him, and the fine is costly—stay away from the woman whose voice is a song.
Because her father is the sheriff of Vegas, and he fucking hates us.
Come to find out, the sheriff is a bit crooked, which
unlocks a whole new set of rules in my playbook. And I have the right tools to
break all of them.
Do I go against my Prez again for my little sparrow? Or do I let her fly away?
ADD TO GOODREADS 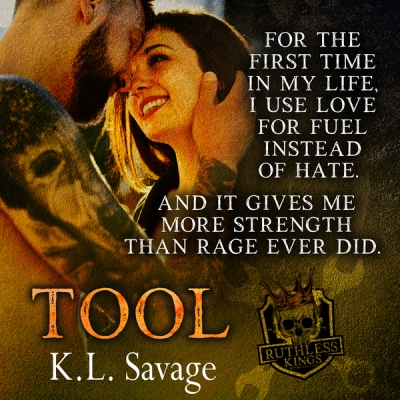 K.L. Savage decided they were tired of looking for the kind of books they wanted to read. They had an itch that needed to be scratched, and as every girl knows, nothing scratches better than an alpha.
They write about gritty, alpha males, sometimes their dark sides, and the women they love. If you have the same itch, their alpha males should fix that.
Author Links
NEWSLETTER
+ FREE BOOK
AMAZON
TWITTER
FACEBOOK
WEBSITE
BOOKBUB

His past has come back to haunt him with a vengeance.

Logan “Tool” is the VP of the Ruthless Kings MC. He’s a man who believes that “hate is born from love”. He is the best friend of Reaper, the President of the Ruthless Kings MC. He had a terrible, tragic childhood until the day he stood up for his mom and changed their lives forever. He has no idea who the men are that his mom called for a favor, but thanks to them, they will have a better life, until Tool’s past comes back to haunt him.

Juliette’s daddy’s little girl. He’s overprotective and a great father, she believes. She hasn’t seen the side of him that the Ruthless Kings MC has, and she has no idea the man her father, the Sheriff really is. She’s going to find out though, and it is not going to be pretty nor will it end well. She’s a good girl, naïve, and she’s been told a lot of stories about the Ruthless Kings and how they were no good, and she was to stay away from them. The only trouble is that she is having a hard time following her father’s rules now that she is out on her own and has had a run in with Tool, actually a couple of run ins now. Will he be the reason for her death, or her savior?

This story has a lot of dark, twisted, tragic, and disturbed parts, but it is such a great read. I love the Ruthless Kings MC and the characters in this series always have so much to share. The men of the MC are brothers by choice, and they fight, ride, and live like brothers. They are fierce in their loyalty to the MC as well as to the women that find their way into their hearts and their lives. They live, love, and play hard. I love the camaraderie as well as the bickering between the characters. The relationship between Tool and Poodle is great to read. This story started with action and it didn’t stop until the end. It has the men of the MC, corrupt police, the bad side of town, and women who find their strength through the men that they fall in love with. They find that they’re stronger with these men and they’re stronger because of them. I loved the twists and dark and dangerous parts of this book, and I loved that Boomer was back. I give this story a 5-star review and suggest it to readers of MC, strong women, and action-packed dangerous stories. I look forward to more of the Ruthless Kings MC in the future. The book cover was perfect for the description of Tool and Yeti.