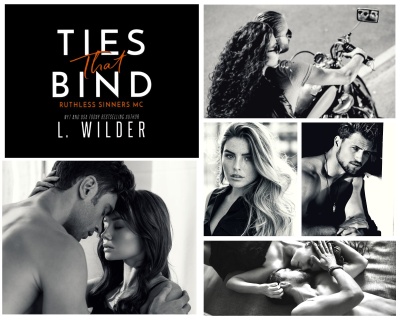 The tension is high. The chemistry is explosive. The romance is swoony. The action is breathtaking. And the heat? That is SCORCHING! ~Britt Red Hatter Book Blog

I love the way L. Wilder creates these MC worlds and how each club has a different set of alpha males that make you fall them all. ~Goodreads reviewer

Delilah and Hawk are delicious together. ~M **the biggest bookworm**

Hawk and Delilah are an unlikely couple and prove that just because you are from two different worlds you can still find love. ~Read All About It

A thrill ride that will have you holding your breath to the very end. ~Book Club Gone Wrong

If the rest of L. Wilder’s new series is like the first book we are all in for a h*ll of a ride. ~Goodreads reviewer

Trust.
Loyalty.
Family.
These are the ties that bind. As a Ruthless Sinner, I live by those words—all the brothers do. We’re family, our bonds stronger than blood, and as their sergeant at arms, my loyalty has never wavered—until the night they brought her to the clubhouse.
The red-headed beauty didn’t belong there.
It was her brother who’d betrayed us, but there she was, atoning for his sins.
I didn’t want to hurt her.
I wanted to protect her, claim her as my own, but as secrets started to unfold, I was left with an impossible choice.
The ties that bind often come at a price—some more costly than others.
This is Hawk’s story- Book 1 of L. Wilder’s new Ruthless Sinners crossover series. Ties That Bind is a standalone MC romance with a group of bikers who will take you on a hell of a ride. They’re foul-mouthed, possessive alphas who will stop at nothing to protect their women. No cheating and a HEA.

Leslie Wilder grew up in a small town in West Tennessee. A country girl at heart, she’s always thought that life is too short, but she had no idea how short it really was until her brother passed away in 2014. She’s always been an avid reader, loving the escape only a great book can give, and wondered if she had what it took to write one of the wild romances she’d come to adore. With the support of her family and friends, she published Inferno: A Devil Chaser’s MC, one year after her brother’s death. With him in mind, she fulfilled her lifetime dream of writing. Since then, she’s completed the Devil Chaser’s Series and continued on with the Satan’s Fury MC Series. She has so many stories in her head, and can’t wait to share each and every one.
Leslie has been blown away by the support of her readers, appreciating every message, review, and encouraging word she’s received over the past year. She looks forward to continuing this journey with them for years to come.

He wasn’t a man who ever thought he’d settle down with one woman, but when he first saw Delilah something inside of him shifted.

Hawk is dedicated to his brothers in the Ruthless Sinners MC. His focus is on keeping them safe and watching their backs no matter what happens. When he has trouble with his distributer his whole life will change. He came from a loving family and is not broken nor is he damaged in any way, he just found that the Ruthless Sinners MC completed him and gave him a place to feel whole and like he belonged.

Delilah and her brother Danny came from a single parent household after their mother left their father when they were young. Delilah worked hard to get her nursing license and works at a Nursing Care Home. She’s happy with her career and her life. When her brother Danny is not heard from by her mom for a day, her mother becomes worried and asks Delilah to check in on him and finds more than she’s looking for.

I really liked this book. It’s full of action, secrets, deception, danger, and an MC that is more than what they seem on the surface. They’re 1%, but they prove that should not judge a book by its cover. They are so much more than what you see. They are dangerous, deadly, but they have huge hearts. I give this story a 5-star review and look forward to more of the Ruthless Sinners MC. If you like MC, men who will do anything for the ones they love, are loyal but just as dangerous, you will love this book.