She has it all, but she still has nothing.

Married to a local politician, Jane Ramos-Palmer won’t put her dreams aside for her husband’s any longer. Overhearing her husband being blackmailed, Janie realizes nothing in her life is as it seems. She’s willing to ditch all she has, so she can gain everything she ever wanted. Fighting an ugly divorce, meeting and falling for Beast couldn’t happen at a worse time for Janie. Escaping her oppressive husband is her top priority, which means her infatuation with a biker must wait.

His world was wrenched cruelly away from him. David “Beast” Huntley’s trust has been violated, and being twice shy means he’s determined not to get involved with another woman. At least not seriously, and not any time soon. But Janie provokes something in him. His attraction to her gnaws at him, even though she’s mired in an ugly divorce with a sketchy politician. Staying away from her is in his best interest and his club’s.

When the president of rival MC blindsides and assaults Janie, Beast’s inner-beast is awakened. He cannot fight his attraction for her, no matter how wrong it might be.

Hypnotized by his azure eyes, it wasn’t until he smiled that I realized I was leaning into him with my hand still clenched his shirt. I tried to lean back, but he wrapped an arm around my neck and the other around my waist. “Oh no, you don’t. Not quite yet. Wanna feel your softness up against me a little longer.”
I sighed through my nose. “Nice as that sounds, it’s not a good idea.”
A roguish grin lit his face. “Good ideas are rarely as fun as the bad ones.”
“Always an answer for everything.”
“Far from it,” he said.
His head lowered, lips brushing mine then settling in as he angled my head where he wanted me. This kiss was gentler but no less passionate. My breasts swelled and my whole chest warmed because his actions told me he would be this good or better in bed. I yearned to drive my hand into his hair. That urge shook me out of the moment and I wrenched my lips free.
“Dammit!” I hissed.
He chuckled. “Gotta say, that’s a step up from ‘God damn it!’ Maybe if I kiss you three more times I’ll get your true response.”
“No,” I cried. “No more kissing!”
“Then no more drinking.”
“What?” I asked trying to break out of his hold.
“You had two drinks right? Time for you to go back to your palace.”
“My palace?”
“What it’s called. Big sign out front, babe.”
“Aren’t you observant,” I said and nearly stumbled backward because Beast finally loosened his grip against my trying to step back from him.
His hands shot to my shoulders. “Are you steady? Or did you sneak a shot in there with the wine?”
“No! I know better than that. I just didn’t expect you to finally let go of me.”
He gave me a strange look along with an eyebrow arch.
I steadied myself and stepped around him. “Lucky for you, I need to get to the other side of the river. I hope you have a nice evening, Beast.”

Karen Renee is the author of the Riot MC Series. She has wanted to be a writer from a very early age, and she’s finally bringing that dream to life. She has worked in advertising, banking, and local television media research. She is a proud wife and mother, and a Jacksonville native. When she’s not at the soccer field or cooking, you can find her at her local library, the grocery store, in her car jamming out to some tunes, or hibernating while she writes and/or reads books. 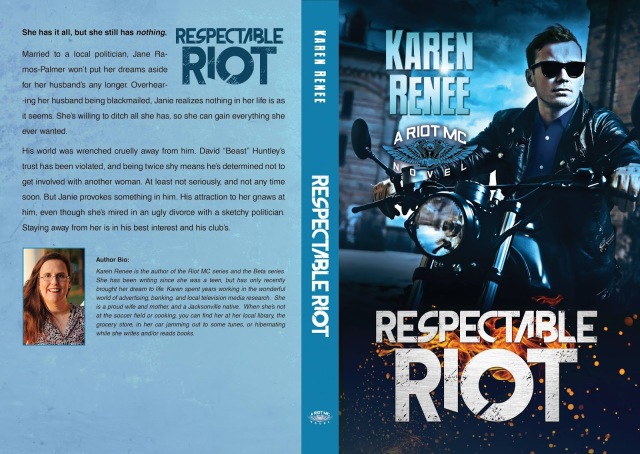