I am pleased to be the first stop on the Tour for Best Served Cold. This was an interesting read, and it was my first read of Pat Adams-Wright. A story of murder, psychological thriller, and twists and turns.

DCI Kirsty Savidge and her team (MCTF – Major Crimes Task Force) are tasked with solving the murder of Avril Webb, the third member of a vicious, bullying school gang from twenty-five years ago, to be killed in a matter of weeks. Although two previous deaths are brought to her attention by pathologist Dr Benedict Aldredge (Benny), they have been ruled a drowning and a gang-related murder in another district. Once Kirsty is aware of them, her detective instincts begin to kick-in, but because of the different Modi Operandi, she’s not sure she’ll be able to convince her superior Chief Superintendent Alison Fry, of a connection. The two women have history and cooperation is rarely a given. However, during the interviews into Avril’s death the remaining members of the gang are adamant about a link between the deaths and press Kirsty to investigate further. This gives Kirsty a legitimate reason to ask for the other two cases to be reviewed although none of those in the higher echelons would want to hear the term ‘serial killer’.

Another murder occurs quite soon, again with a different MO. At the same time, Kirsty becomes aware she’s had an intruder in her home, but she and DS Danny Hewitt decide to put off any investigation until the current case is finished. Also, Chief Superintendent Fry appears to be having some personal problems when Kirsty spots her wrist wrapped in bandages and bruising on her neck. The inclement weather is also having an effect on the investigation, as some people are having to work from home, including Savidge and Fry, who finds herself stranded at Kirsty’s cottage because of the heavy snowfall. Fry brought news Kirsty could proceed with linking all the cases. Members of the now covert group (nobody is aware in the present that these people are still linked and running false businesses for their leader, Chris Shaw), are now beginning to take care of their own security turning down protective custody. The police become suspicious.

Throughout, there is a running commentary from the murderer, about his methods and reasoning. Kirsty has her suspicions and is convinced one of the gang members is carrying out the murders. Only when information from those badly bullied at school does the method of the killings fall into place. Background information on two of suspects is proving illusive. A failed copy-cat attack narrows Kirsty’s choice to one and covert surveillance is set-up. At the time of Avril’s funeral the next day, it’s revealed the man watching the suspect has been murdered and the suspect has disappeared. He’s gone to Plan B – murdering the rest of the gang at the funeral. He kills two more using sniper-fire, then escapes. At the airport he is apprehended and held at gunpoint by two armed response officers, but is then shot himself when one officer mistakes a remote-control for the handle of a gun. The suspect’s lap-top reveals all, in the form of two books so all questions can be answered at a meal supplied by the Chief Superintendent. At the end of the book we are left wondering whose Kirsty’s intruder was and also who had leaked information to allow a copy-cat attack. 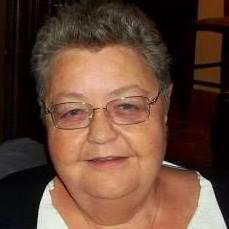 Pat Adams-Wright was born in Halifax, West Yorkshire, UK, on the 15th October 1954, in Wellesley Barracks, to a sergeant major father and a working mother. Teacher trained in Liverpool, she actually taught very little during the austere period for practical subjects, doing any work she could find to keep the wolf from the door. However, this did provide plenty of experience and writing material. Finally settled into a teaching job, disaster struck after an accident left her disabled. After many years of using writing to distract her from pain, she successfully completed her debut novel, Run, which was published on the 18th April, 2015.

A woman is murdered in her own garage upon arriving home from a night out with friends. The murderer has posed her body suggestively and it’s not his first murder. As DCI Kirsty Savidge and her team are investigating this murder a man is murder. These two victims are link in their past. As the investigation goes on, DCI Savidge is informed that there were two other murders recently of two men who are of the same age as these two victims. Do they have a serial killer on their hands in Halifax?

I liked the plot of the story and the characters worked very well together. I enjoyed the suspense and the unfolding of the story and the crime. It was perfectly paced and the way that the plot unfolded and showed who the murderer was kept me wondering until almost the end of the book. I think I figured it out just before DCI Savidge.

I give this story a 4-star review and recommend it to readers who like psychological thrillers, police procedural and stories with twists.