Coop
Becky is life. She’s the sunshine that lights up my world. But for some reason, I just can’t seem to fully commit. Everything in my head is screwing with me, and if I don’t figure it out soon, I’ll lose her. And to make matters worse, my sweet angel of a daughter has turned into a rebellious seventeen year old that is doing everything in her power to kill me. Something’s gotta give or I’m going to lose everything I’ve fought for in my life.
Becky
Coop has always been a mystery, but he was my mystery. Now, though, I can’t take any more. I want him, but I want all of him. If he can’t let me in, I can’t stick around. I need the whole man, not just the pieces he’s willing to give me. But even if I get him, can I hold onto him? He’s the one thing I want most in this world, but I have a feeling that things aren’t going to go my way. 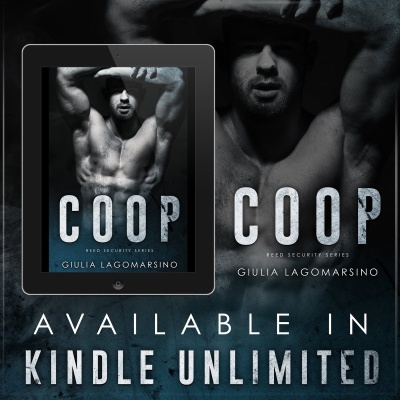 Coop is a man who has lived through hell and is damaged both physically and mentally. He has a daughter that he is overprotective of and he is member of Reed Security. His main priority is to keep his daughter safe from the world and the bad guys at all costs, however, those costs could make him lose his daughter unless he loosens his reigns on her. He has a girlfriend, but he has a hard time connecting with her and if he doesn’t get himself together, he’s going to lose her too.

Becca is a hacker that used to work for Reed Security but left them to work for an insurance company. She’s bored to death with her new job, but she’s afraid to take the leap to go after what she wants. She has a wild imagination and loves to search deep for answers. Her relationship with Coop is in danger of ending unless he can open himself up to her. She’s had all she can take and gives him an ultimatum. They are starting to work things out and get on track until one fateful night ruins their relationship.

I loved this book. The first part had me laughing at the comradery of the Reed Security guys and the antics and comments they make. It was light and funny, then BOOM! It changed and had me crying and wanting to scream at these guys. It went from light to dark and so intense. I hated to put it down, I needed to find out what was going to happen, who the bad guy was, and if things would ever be the same again. It was full of family support, suspense, twists, and intrigue and I loved every page I read. I give this book a 5-star review and need to make time to go back and read the others in the series. If you like men dangerous men who are a little paranoid, crazy, over the top protective, ex-military, and women are just as dangerous and crazy as the men, then you will love the Reed Security Group. Pick up one these books and read them, you won’t be disappointed. It will keep you on the edge of your seat until the end. I can’t wait for TNT.