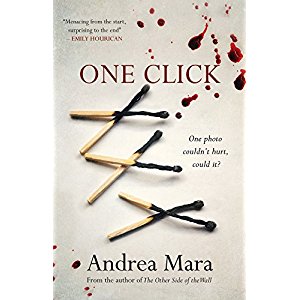 Lauren is a mother, and a counseling psychologist who is on vacation with her two teenage daughters in Italy. She has a blog where she posts photos along with posting them on twitter. She posts what she thinks is an innocent photo, but it goes viral and draws the attention of one person who will go to any extent to find out who the woman is in the photo and she takes out her anger and frustration on Lauren when she won’t share who the woman is in the photo.

Cleo a young woman who is on vacation in Italy as well. Unbeknownst to her, she is also now an internet sensation. She has no problem with it when she finds out, but now that someone is trying to find out who she is after seeing the photo, she becomes a little concerned. She confronts the only person she can think of that would be trolling Lauren to get her name. She has a past that she thinks is coming back to haunt her. The only thing is, Cleo is not afraid to confront her past. Surprisingly, her recent past is not what is causing the problem, but she gets closer there by her confrontation.

Twists and turns throughout this book. I was so drawn into this story it was hard to put it down. It drew me in from the first page. There were twists on just about every page. I love to read a suspense story and think that I have figured it out before I finish it, but this one made me question each thing I came up with. Just when I thought I had it all figured out, another wrench was thrown into my deductions. This was a great read, if you like to read psychological thrillers, suspense, and stories about social media, this is the book to pick up. It has all of this and more in it. It really shows the hazards of social media and makes one stop and reconsider what they are posting on-line. It so well done that as the reader, I felt that they could have been talking about me. I really enjoyed this story and I give it a 5 star review.