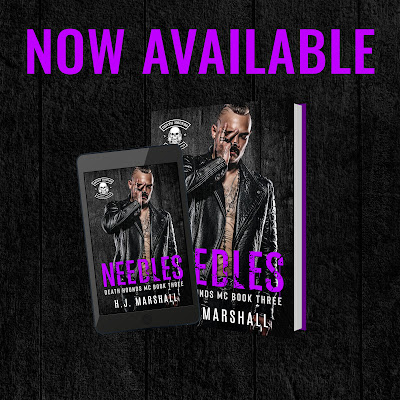 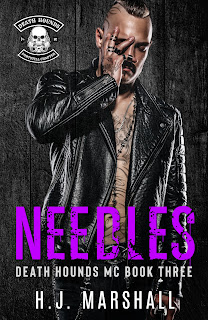 From the moment I was born, I was destined to be a Death Hound. Tragedy tore me from my family at an early age and cast me into a reality so dark, I contemplated ending it all. But my club brought me back from the edge, fostering my dreams and giving me a new lease on life. Years later, with secrets from my tormented time threatening to pull me back into the abyss, the innocence of a child kept me hanging on.
In finding her family, I discovered a beautiful woman who understood that in darkness, light could be found. She understood me like no one else had, but her life was complicated, full of despair and loneliness on a level I couldn’t comprehend. Every day, she fought her own demons.
When the nightmares returned, pulling her into a world of depravity and pain, I found a part of myself that I didn’t know existed. I never asked to be a protector, but no one deserved to live in fear. So, I would walk through hell to save her. 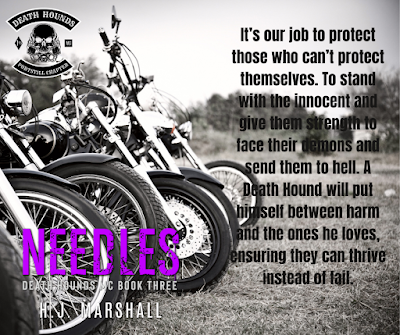 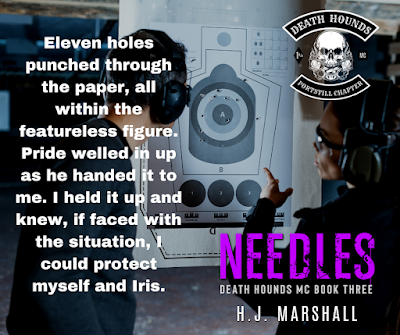 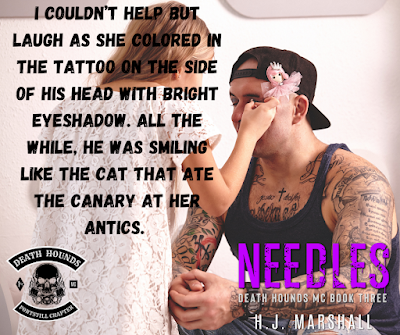 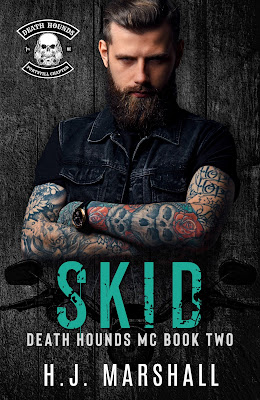 H.J. Marshall began her love of reading and writing at an early age and has always dreamed of being a writer full-time. A nomadic youth exposed her to different perspectives of life, community, and culture, resulting in a lifelong love of food, music, and history. When she is not writing, she enjoys the music of all generations and genres, writing full-time, and living in her quiet cabin in the woods. Currently landlocked, H.J. dreams of her beach house, salty air, and a life filled with laughter. 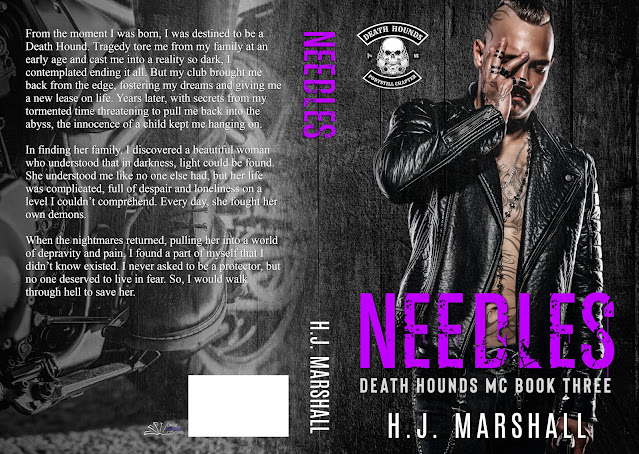 He was born and Death Hound and he will die a Death Hound. A tragedy tore him away from the only family that he cared about and that loved him. When he is thrown into a pit of hell, he has to find a way back to his real family, but the years away could destroy him. Monroe “Needles” is a man that will fight for those that can’t fight for themselves, and when he helps his “brother” Skid get rid of those that hurt Skid’s old lady, he finds some peace in his tortured past, and a little girl that latches onto him and won’t let go. Giving Needles a new look on life and a reason to move forward.

She was left behind by her sister when they were twelve. Her sister didn’t have a choice and if it were up to them, they would have stayed together, but they had to listen to the adults. Twins in foster care torn apart to leave one behind and believing that she’s not worth a family or love. A young girl that will look for her sister every day until they can be reunited. Violet and Rose were close when they went into foster care, but when Rose was adopted leaving Violet behind, Violet felt that she wasn’t good enough and then she was finally seen by someone that wanted to help her, so she found a new family.

Needles and his MC are a group of men that fight for those that need help and will protect anyone in need. When they find a little girl in a sex trade ring, they find more than what they were expecting, and their family will grow. Pasts will haunt some and strength, love, and determination will override the pain, horrors, and tragedy that these characters have known. I loved Needles’ book and Violet and Needles are great characters. This is a tough series to read, but it is done so well. Ms. Marshall has a great way of writing these tragic stories and her characters are strong survivors that come to life and had me hoping for redemption, healing, and the love of a great partner for each of them. I give this book a 5-star review and look forward to more of the Death Hounds MC Series.