He stole my heart out of revenge.
There was one thing I always thought was mine to give: my heart.
I never imagined a marauder would steal it out of vengeance—vengeance that had nothing to do with me. His greatest enemy happened to be the man in love with me, and somehow I became nothing but a pawn. I was no damsel in distress, though. More like an archer, ready to battle.
And my target? The marauder himself.
Cashel “Cash” Kelly.
Kelly might have been as gorgeous as he was ruthless, but he had no idea what I’d do to steal it back. Or better yet, get even.
She was determined to keep what was mine.
They say hearts can’t be stolen unless they’re willing to be. Tell that to the man everyone on the streets called “the marauder.”
Me.
Because by the time I was through, Keely Ryan’s heart would be mine. And my enemy’s? As good as broken. Trouble was, the archer was precise with her aim, and her arrow was pointed at my heart. 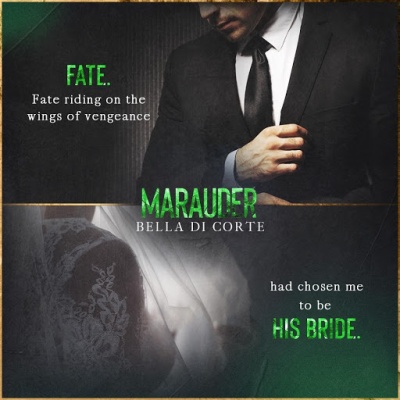 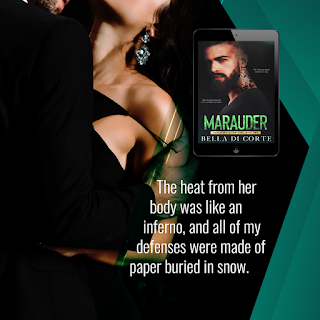 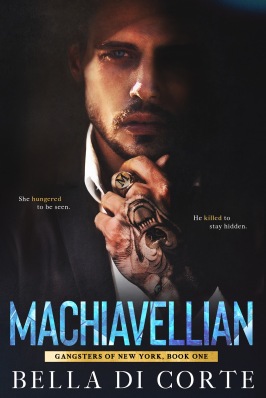 Bella Di Corte has been writing romance for seven years, even longer if you count the stories in her head that were never written down, but she didn’t realize how much she enjoyed writing alphas until recently. Tough guys who walk the line between irredeemable and savable, and the strong women who force them to feel, inspire her to keep putting words to the page.Apart from writing, Bella loves to spend time with her husband, daughter, and family. She also loves to read, listen to music, cook meals that were passed down to her, and take photographs. She mostly takes pictures of her family (when they let her) and her three dogs.
Bella grew up in New Orleans, a place she considers a creative playground.
She loves to connect with readers, so don’t hesitate to email her at belladicorte@gmail.com if you’d like to reach out.

Marauder: (n) A person who marauds; a raider

He wants to steal her heart and keep if for himself, but only because he will be hurting his enemy. Little does he know that stealing a heart can backfire on him. Cash Kelly is finally able to breathe fresh air again. He has a lot to get done and to regain after the death of his father and the abandonment of his twin brother. They are now on different paths and Cash is determined to regain his father’s territory, Hell’s Kitchen.

She lost her twin years ago and feels as if she lost a huge part of herself at that time. She hasn’t felt whole since she was a little girl and very few understand her. She found a new best friend, but she only fills a small part of that hole and she’s not always around. Keely Ryan is a struggling actress that is barely making ends meet. She’s strong willed, independent, and caring. She’s protective of those she loves. Her life is about to be turned upside down and there is nothing she will be able to do about it.

Whew, Cash Kelly is a force to be reckoned with and he is determined to get what he wants, even if he has to steal it. He always gets what he wants, no matter what obstacles are in his way. Cash is a sexy man and this book was an awesome read! This story is full of danger, cocky gangsters, and some twists that you would never expect coming. I loved every bit of the book and hated to come to the end. If you like Mafia stories, stories with awesome characters, sassy, strong women, sexy as sin men, and danger filled pages, you will love this book and series. I stayed up way past my bedtime to read and finish this book. I give this book a 5-star review. I love the Gangsters of New York, and I can’t wait for the next one to come out.