★ Add to your TBR: http://bit.ly/GRBorntoKill

When I was seven, I stole her candy.
When I was fifteen, I stole her first kiss.
At eighteen, I stole her innocence.
Now at twenty-five, she’s trying to steal my life.
My fate was sealed being born the bastard child of my father.
I played my role in the De Luca family until reality caused my path in life to
skid to a halt.
My fate is damned.
And the one person that could save me is the one I’ve stolen so much from in the past.

What does it mean when you are nothing more than a pawn in the game of life? When only one person cares if you live or die? And yet that same person could kill you just as easily.

Stefano fights, kicking and beating at Angelo’s grip around his throat as he stares right at me. Into me. Through me. I give him a slight nod of my head letting him know that he has to do something or this will ultimately be his death. Stefano seems to understand and raises his arms, sliding them in between Angelo’s and the hold on his neck. He quickly spins around, kicking him in the shins until Angelo stumbles back, a sick smirk on his face. He moves in quickly, landing a right hook to Stefano’s jaw. His head snaps back, his eyes rolling into the back of his head. I watch it as if it’s all in slow motion. Stefano falling to the ground, the thud of his body hitting the concrete under him. The sickening sound of his head as it slams into the floor. Blood slowly seeps out around his lifeless body.

“Useless little f*cker,” Angelo growls. I pull my gaze away from Stefano and lock them with Angelo’s.

“What am I supposed to teach him now? How to be reborn?” I snap at him. Angelo moves quickly, his hand wrapping around my throat as I’m slammed into the wall behind me.

“Look at you thinking you are a grown man. Are you so grown that you can take me? Huh?” 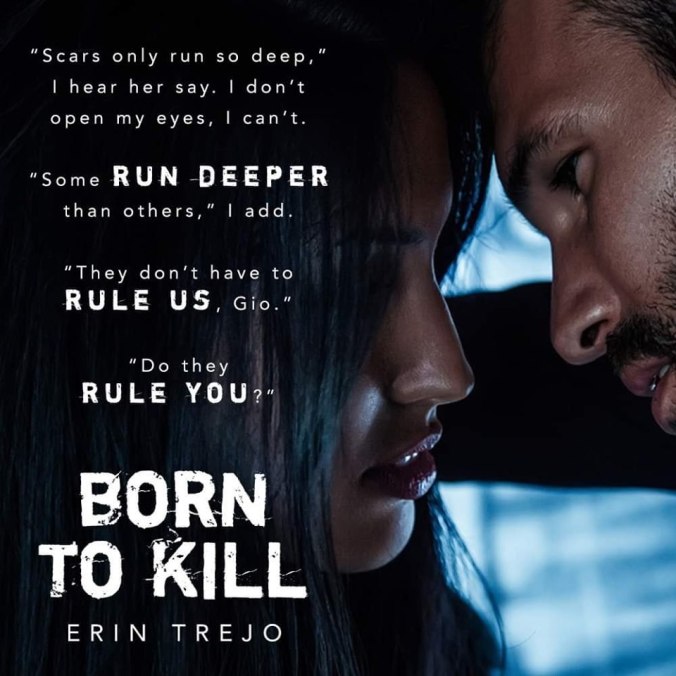 Add to your TBR: http://bit.ly/GRBorntoKill